In the early seventies, a group of young men and women joined the Fire Department and starting working to bring the department into the modern age. Slowly but surely, newer equipment was acquired. Training was brought into the modern age. A Prevention program was initiated. An Emergency Medical Service group was formed. Recruitment swelled the ranks, and by the early eighties, Jerome had a Fire Department that could deal with emergencies in an efficient and professional manner. And, like the majority of fire departments around the country, it was an all-volunteer organization.

Since then, the department has continued to upgrade its services. It established a rope rescue team to deal with rescue calls on the mountain above town and those of neighboring agencies. It has acquired a new compressed air/foam pumper for structural and wild land fires. And most recently, it acquired a new pump engine.

The Jerome Fire Department operates under the supervision of Fire Chief Rusty Blair. The department consists of the Chief, a volunteer Assistant Chief, two full-time Duty Officers and a squad of volunteers. We provide fire, EMS, rescue, and wildlands services to the community and surrounding areas. We cover a geographical domain of over 500 square miles – twenty miles north and twenty miles south of Jerome along the mountain’s face – nine miles west to the mountain’s peak – and four miles to the valley below. Most of that area is rough wilderness terrain. The Jerome Fire Department also has mutual aid agreements with the neighboring communities of Clarkdale, Cottonwood, Cornville, and their surrounding rural areas.

In 2019, the Jerome Fire Department is officially 120 years old and to this day is still going strong. 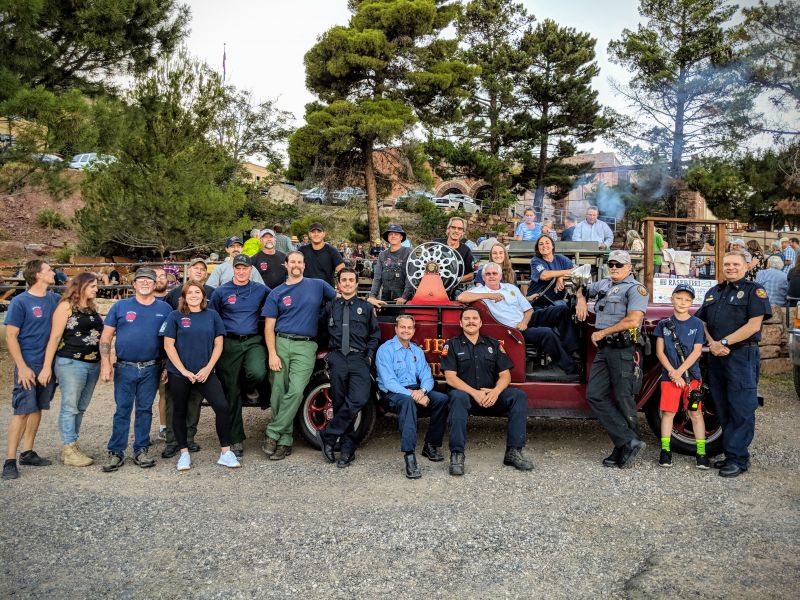 The Red Cross has partnered with the Jerome Fire Department to provide free smoke detectors for Jerome residents, which can be installed in your home by our Fire Department. To participate, contact Rosa at Town Hall, and complete this form.